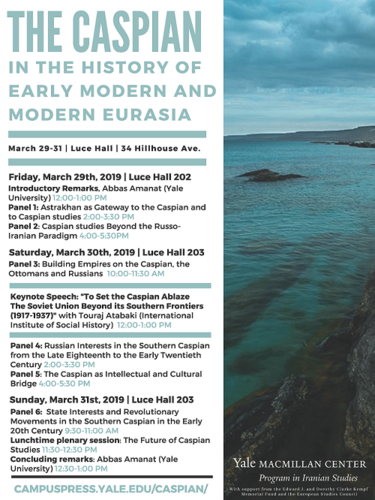 An international conference exploring the dimensions of the Caspian Sea as a geographical frame for historical study will take place on campus March 29-31 in Henry R. Luce Hall, 34 Hillhouse Ave.

“The Caspian in the History of Early Modern and Modern Eurasia” is organized by Abbas Amanat, the William Graham Sumner Professor of History, and sponsored by the Yale Program in Iranian Studies. The event will bring together speakers from Russia, Europe, and North America to ask whether the Caspian functions as a medium of exchange rather than a barrier, and how this helps us to understand the various regions on the Caspian littoral. The event is free, but registration is required.

Touraj Atabaki, of the International Institute of Social History in the Netherlands, will deliver the keynote lecture on Saturday, March 30 on the topic “To Set the Caspian Ablaze: The Soviet Union Beyond its Southern Frontiers (1917-1937).”

The Edward J. and Dorothy Clarke Kemp Memorial Fund, the Council on Middle East Studies, and the Council on European Studies provided support for the event, which was co-organized by Kayhan Nejad and Kevin Gledhill, Ph.D. candidates in Yale’s Department of History.