The Near East Manuscripts Card Catalog provides author, title, and subject access for manuscripts in Near Eastern languages not represented in Orbis. There is also a shelf list for this collection; cards are filed by call number which is composed of first the name of the language (Ethiopic, Hebrew, Persian, Turkish, Urdu, etc.), and then a number – e.g. Ethiopic 1, Ethiopic 2, etc. Please ask at the Public Services desk for access.  All of the Arabic collections – Arabic, Salisbury, and Landberg – and the Persian language manuscripts are available through Orbis; use any of the Orbis indexes to retrieve these records. 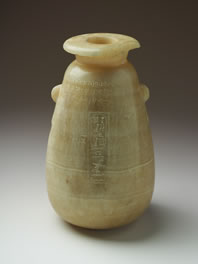 Babylonian Collection. The Babylonian Collection’s Persian material is dated from ca. 600 BC to AD 600. The collection holds approximately 700 tablets and 100 seals from the Achaemenid period (ca. 600-300 BC), sixty Parthian terracotta figurines (ca. 250 BC), as well as hundreds of Sassanian seals and some Sassanian sealings, i.e., seals impressed on clay bullae. Some of the seals and sealings are inscribed, usually with the names of the owners, but most are anepigraphic.

The reading rooms have a number of books and journals that are relevant to ancient Iranian studies, such as Elamite, Old Persian, and Achaemenid languages and archaeology. There is a limited library for Parthian and Sassanian studies, mainly art historical works.

The Ghani Collection. A rich collection of documents in Persian of the Qajar period (1785-1925). The collection is mostly about state affairs in the latter half of the nineteenth century but also Iran’s relations with other countries of the Middle East and with Europe. The renowned Iranian scholar, diplomat and medical doctor, Dr. Qasem Ghani, put together this collection between 1930’s to 1950’s from diverse sources (such as the heirs to the Qajar nobility).

Liman (Arthur L) Papers. The papers consist of correspondence, diaries, legal documents, speeches, writings, printed material, photographs, and audiovisual materials that document the career of Arthur Liman. The papers emphasize the 1987 Iran-Contra hearings but also document many of Liman’s other professional activities, including the Attica Prison uprising investigation and the Michael Milken trial. The papers contain an extensive collection of audiotapes and videotapes featuring conversations with and interviews of Liman.

The Joseph Verner Reed (1937-) Papers. The Joseph Verner Reed (1937-) papers consist of correspondence, scrapbooks, speeches, topical files and photographs. The papers primarily document Reed’s service as ambassador to Morocco (1981-1985) and his tenure as special assistant to David Rockefeller at Chase Manhattan Bank, which includes materials documenting Rockefeller’s role in gaining permission for the exiled Shah of Iran to undergo medical treatment in the United States in 1980.

Paxton (John Hall) Papers. Correspondence, writings, photographs and printed materials of John Hall Paxton, American foreign service officer. The papers reflect primarily Paxton’s service in China from 1925 to 1949, broken only by a year in Teheran in 1943. He made a dramatic escape from China (1949) and returned to the United States. He broadcast for the Voice of America, and returned as Consul to Isfahan, Iran in 1951, where he died in 1953.

Jackson (Abraham Valentine Williams) Papers. Notes and drafts of A. V. Williams Jackson for articles and speeches, largely on Sanskrit and Avestan grammar and literature and the cultures of India and Iran.

Islamic Fundamentalist Audio Recordings Collection. The collection consists of audio recordings (in Arabic) of sermons, lectures, speeches, recitations of the Qur’ān (Koran) and poetry, interviews, radio broadcasts, and conversations, pertaining to Islam, in particular the fundamentalist perspective, and the Arab world. Over 200 speakers, primarily clerics, from over a dozen countries in the Middle East, Indian subcontinent, and Africa, are represented, documenting the views of a range of Jihadi, reformist, and moderate Islamic religious leaders.

The collections of Iranian art at the Yale University Art Gallery, both pre-Islamic and Islamic, are kept by the departments of Asian Art, Ancient Art, and Coins and Medals. The strengths of the collections are in textiles and ceramics. There are over six hundred textiles in the collection. The majority of them were assembled by Arthur Upham Pope and Phyllis Ackerman and were given to Yale in the 1930s by Mrs. William H. Moore. Many of them were published in Pope and Ackerman’s A Survey of Persian Art (1938). The nearly one hundred ceramics represent the Neolithic period through the eighteenth and nineteenth centuries. The mina’i wares are particularly strong. The collection of works on paper is smaller but choice. One highlight is an important group of Timurid period manuscript pages from a now dispersed Majma’ al-tawarikh of Hafiz-I Abru.

An overview of the arts of Islam at the Yale University Art Gallery is available on the Gallery’s website at artgallery.yale.edu/arts-islam. The collection can be searched through our online database at artgallery.yale.edu/collection/search. Search on Persian and/or Iranian in the culture field and narrow your search by choosing specific materials or types of objects in the classification field. 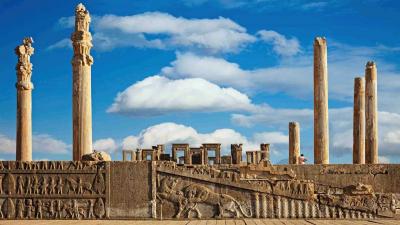 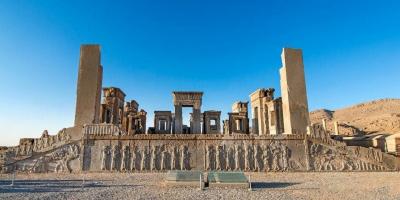 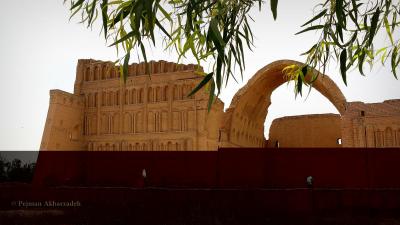