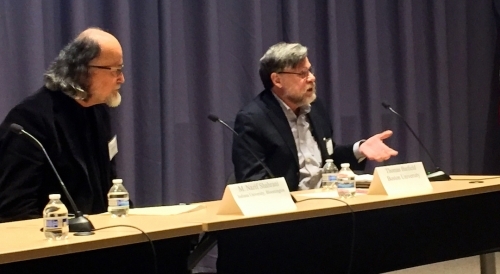 On April 13 and 14, the Yale Program in Iranian Studies—operating under the auspices of the MacMillan Center’s Council on Middle East Studies—hosted the Conference on Identities in Contemporary Afghanistan (CICA). The conference, organized by Naysan Adlparvar (Rice Faculty Fellow, Yale University) and Alessandro Monsutti (Chair of Anthropology and Sociology, Graduate Institute, Geneva), invited both established academics and early career scholars to Yale. This was undertaken to both contribute to existing debates on the conference topic, but also to highlight new research being conducted within the field.

CICA opened with a key note speech by Thomas Barfield (Boston University), which highlighted the re-emergence of sub-national identities in Afghanistan. Outlining the persistent historical nature of core regions in the country, Barfield persuasively argued that the post-2001 government structure is overly centralized. He contended “Afghanistan’s history would suggest that a more federal structure would provide a much firmer foundation for the country’s people and institutions.”

Two panels made up the remainder of the first day’s sessions. Panel 1 focused on shifting subjectivities in Afghanistan, with presentations from Antonio Donini (Tufts University) and Andrea Chiovenda (Harvard University). Donini explored the role of humanitarian action as a vector of social change in Afghanistan. Chiovenda, on the other hand, applied Jacques Derrida’s notion of Hauntology—along with extracts of ethnographic fieldwork—to frame a debate on interethnic conflict between Pashtuns and Hazarahs in Afghanistan.

Panel 2 broached a discussion of new frontiers in the interpretation of Afghan identity. Three panellists—Khadija Abbasi (Graduate Institute, Geneva), Omar Sharifi (Boston University) and Nafay Choudhury (King’s College, London)—presented new research that either detailed new forms of Afghan identity or took new analytical entry points in its analysis. Abassi, examining the “return” of second generation Afghan refugees from Iran to Afghanistan, highlighted the nature and emergence of the identity category ‘Iranigak.’ In the second presentation of the panel, Sharifi discussed Nauroz (Persian New Year) in the context of Mazar-e-Sharif. He highlighted the role of Nauroz, and associated ceremonies, in building an inclusive Afghan identity and promoting a common Islamic faith. Finally, Choudhury considered the shifting identities of Afghan money exchangers. He illustrated the flexible use of kinship networks and religious identity in their professional life.

The second day of CICA featured David Edwards (Williams College), who delivered a keynote speech on “Sacrificial Identities.” Leading the audience through an “Afghan tragedy in four acts,” Edwards traced the genealogy of suicide bombing and its impact upon identities in Afghanistan. This included Act One, in the early years of the Soviet Occupation, when mujahidin groups turned victims into martyrs. Act Two, in the later years of the Occupation, saw newly arriving Arab mujtahids turning martyrs into saints. In Act Three, manifest in 9/11, sacrifice was weaponized and utilized on the global stage. Finally, Prof. Edwards explained, the Taliban suicide bombing campaign from 2005 onwards—with its unpredictable impacts on public and private life—constitutes Act Four.

Panel 3, in the early afternoon of  day two, addressed the changing dynamics of Hazara collective identity. Dr. Melissa Kerr Chiovenda (Harvard University) opened the panel discussing individual suffering and collective trauma amongst Hazaras activists. She noted that there is a tendency for activists to favour past collective trauma as a narrative, as opposed to personalized accounts of individual suffering, as the latter constrains their ability, “to serve as an example to the world of what Hazaras should be.” Adlparvar, arguing the case for a recognition of intersectionality in the study of identity in Afghanistan, discussed the emergence of class relations amongst Hazaras in Bamyan. Finally, Niamatullah Ibrahimi (Deakin University) outlined the political re-emergence of Sunni Hazarahs in post-Taliban Afghanistan. He explored not only the changing socio-political landscape that allowed for such a mobilization to occur, but also the partial fragmentation of Tajik identity that the development of a Sunni Hazara identity engenders.

The second day of CICA ended with a discussion with M. Nazif Shahrani (Indiana University, Bloomington) on identity and the state. Pointing out that the Afghan state is, indeed, a “rented state,” Shahrani argued convincingly for the decentralization of authority in Afghanistan. Engaging with Barfield’s earlier keynote speech, Shahrani closed with a discussion of “community self-governance”; outlining the legal and administrative changes required to operationalize such a concept in present-day Afghanistan.

In the conference wrap-up, Monsutti expertly highlighted the valuable contributions that had been made over the previous two days of discussion. He pointed out how contemporary research on identity was not only necessary, but that such inquiry should seek to move beyond the conventional framings of identity in Afghanistan. He also reflected on the constraints that “identity” as an analytical entry point held—welcoming new modes of social analysis including, for example, “mobility” and “selfhood” as alternate lenses through which to frame associated research within the field of Afghan Studies.

The conference is made possible with a grant from the Edward J. and Dorothy Clarke Kempf Memorial Fund, and funding from the Whitney and Betty MacMillan Center for International and Area Studies at Yale. Additional financial support has been provided by both the South Asian Studies Council and Council on Middle East Studies at the MacMillan Center and the American Institute of Afghanistan Studies. Funded in part by a U.S. Department of Education Title VI National Resource Center grant.