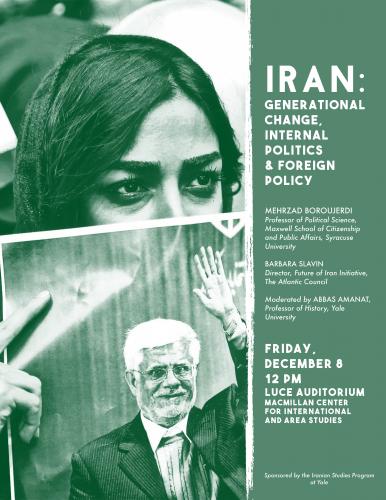 On December 8, the Program in Iranian Studies at the MacMillan Center sponsored a panel discussion titled “Iran: Generational change, internal politics & foreign policy.” The panelists were Mehrzad Boroujerdi, Professor of Political Science at Syracuse University, and Barbara Slavin, Director of the Future of Iran Initiative at the Atlantic Council. The discussion was moderated by Abbas Amanat, Professor of History at Yale University and Director of the Program in Iranian Studies.

Amanat began by noting the importance of evaluating how Iran has changed since the Iranian Revolution in 1979. He wondered if there is still an ideological regime in Iran— “whether this is still a revolutionary society, or whether a chasm has since been developing” between the ideals of the Islamic revolution and the the realities of life.

Boroujerdi then talked about his ongoing attempt to characterize the Iranian post-revolutionary elite. This 14-year long empirical study seeks to better understand the structure of Iranian politics beyond focusing on just a few Iranian personalities. Boroujerdi began the project after noticing that “personalities acquired a larger than life importance in our discourse of what is happening in Iranian politics.”

Iran, the world’s only theocracy born from popular revolution, has a complex, interconnected political system with the supreme leader at its head. Boroujerdi looked at 2,323 people from the top tier of Iran’s government and analyzed their family ties, affiliated political organizations, and gender, among other factors. Of the 2,323 members of the political elite, only two of them served in parliament before the revolution. “Everyone else is brand new,” Boroujerdi said, and his project sought to answer the fundamental question “Who are these people?”

One statistic Boroujerdi looked at was place of birth. “The makeup of the elite under the Shah was heavily concentrated in Tehran,” he explained. “One of the things the standing republic claims to have reversed is the fact that they have created a path to social mobility for people coming from provincial backgrounds.” Boroujerdi’s data looking at the birthplace of the 2,323 political elite, however, suggests otherwise.

The Iranian Internal Ministry divides Iran’s provinces into three categories: developed, semi-developed, and underdeveloped. Boroujerdi noted that interestingly, “many of the ones that are considered to be underdeveloped also happen to have the least representation in terms of political power.” This makes little sense given that election to the Assembly of Experts is based on province. Why would Isfahan and Tehran be the most popular provinces of birth for members of the political elite? Boroujerdi explains that “the system is rigged… when you look at the background of the people who represent these [underdeveloped] provinces, a good number of them are people who carry the title of Representative of the Supreme Leader.” He added, “you win when you are a Representative of the Supreme Leader.”

When looking at gender, only 3.2% of the political elite are female based on Boroujerdi’s calculations. There is not a single female in the Expediency Council or the Guardian Council, but 19.6% of Vice Presidents have been female. Boroujerdi explained it as a tactic to appease women in the country without giving female politicians substantial power.

Boroujerdi also noted that 58% of the political elite served only once, and only 1% has served in 10 or more positions. Many of those in the 1% are the personalities in Iranian politics that many focus on. Interestingly, he also found that incumbency rates are higher for appointed positions than elected positions.

With more of a bottom-up focus on the Iranian political environment, Barbara Slavin talked about her observations visiting Iran as a journalist for the past two decades. “What has struck me over time is… the increasing political sophistication people have shown.” Despite widespread nepotism and corruption in the government, “we have also seen a persistent interest in elected institutions.” Slavin argued that Iranians are engaged in the democratic process by pointing to the relatively high voter turnout rates in Iran. Even though all candidates are vetted by the Guardian Council, “these elections are fiercely contested,” she said.

Iranian voters have “taken a system with all of these limitations and they have chosen the best candidates they can find, people they think will most likely improve their situation and improve the situation in the country,” she said. Over the past two decades, Iranians have “generally gravitated towards candidates that they thought would be most likely to boost Iran’s national image, increase social freedom, and improve the economy” (with the exception of the elections of 2005 and 2009).

Despite the many problems with the Iranian governmental system, Slavin believes that “Iran now has the bones of democracy, something that most of its neighbors lack.”