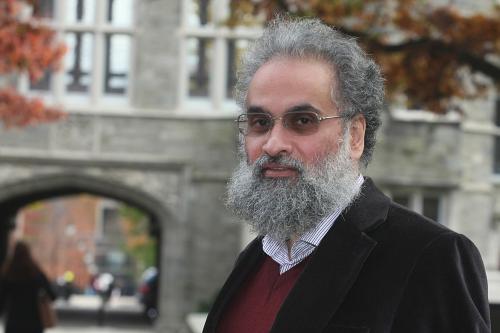 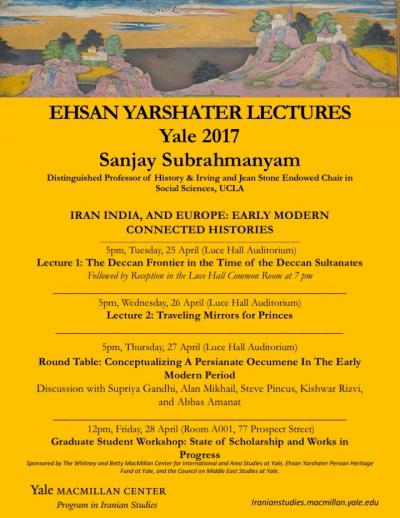 Sanjay Subrahmanyam presented new research as well as built upon his body of work on “connected histories” and the early modern Persianate world over the course of the Yarshater lecture series at Yale this April. The first lecture on linkages between Iran and the Deccan began with a fascinating snapshot of the material culture underpinning this world of connections: an image of the lari, a fish-hook shaped silver coin that originated in the Iranian province of Laristan and soon began to circulate across the western Indian ocean in the fifteenth century, becoming the most common currency in the region. Placing Iranian migrations to South Asia against the backdrop of the political consolidation of the Safavid state and the Deccani Sultanates in the sixteenth century, Subrahmanyam identified two major trends: the migration of elite Iranians enacting the transmission of cultural capital, and the movement of more lowly Iranians in pursuit of social mobility, who were valued for their martial prowess. The lecture raised the possibilities of comparison with African migrations to India in the same period, as well as the question of why the Sultanate of Golconda, located at a greater geographical remove from Iran, maintained closer cultural relations with Iran than its western neighbors, the Sultanates of Ahmadnagar and Bijapur. Having painted a Persianate world of mercantile, political, cultural, and charismatic connections and circulations in the first lecture, Subrahmanyam then turned to the co-production, appropriation, and refashioning of the Persianate through encounters between Portuguese Jesuits and Mughal litterateurs.

The second lecture focused on a close analysis of a series of texts, notably the “mirror of princes” text produced through the collaboration of Abdul Sattar, a scribe in the court of Jahangir, and Jeronimo Xavier, a Jesuit author. The discussion featured conversations over the evolution of the “mirror of princes” genre, early modern co-authorship, and the transmission of the thought of Machiavelli into a Persianate canon.

The round-table with Yale faculty members (Supriya Gandhi, Alan Mikhail, Steve Pincus, Kishwar Rizvi, and Abbas Amanat as chair) on “Conceptualizing a Persianate Oecumene in the Early Modern Period” and the graduate student workshop circled back to big questions: What do we mean by early modernity? What are the uses and limits of the category of the Persianate? All in all, Subrahmanyam’s readings of Persian texts and individual trajectories amidst macro-analytical conceptualizations of time and space rendered the lecture series rewarding to both specialists and non-specialists alike.

Written by Tiraana Bains, a 2021 graduate student in the Department of History.

April 25. The Deccan Frontier in the Time of the Sultanate (watch video)